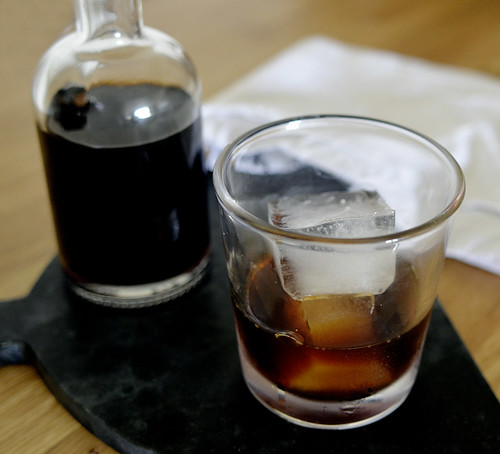 I’ve been toying around with having a cocktail post for a few weeks now. If you’re following me on Twitter, you may have noticed the hints in my #WeekendBakes polls. I wasn’t 100% sold that I would have enough confidence to execute until last weekend. My husband and I were invited out with friends and the night ended at a local speakeasy…

First, this speakeasy is literally a mile from my door, and never knew. Well, I never knew, but somehow, my husband had been there before. Second, you can’t get in without having reservations. You can’t get reservations without texting a phone number, and you can’t get the number unless it’s given to you. IF you manage to get in, you can only leave through the back entrance… It’s all very trendy and a tad hipster in theory, but I was pleasantly surprised when we sat down. The space is limited to a handful of people so it isn’t overly crowded, it was super cozy, and the drinks were superb. We each got something different and of course shared sips. I also had a free taste of the Sam Adams Utpoias, and for my nerdy beer side, that was worth the hype alone.

My husband ordered a bourbon drink, and when I sipped, I knew I wanted to recreate it at home. It also had a snippet of a vanilla bean pod in the bottom, to which I tried convincing my husband to let me smuggle out. Have you seen the price of whole pods at the store lately? Plus, it was soaked in bourbon, so it would probably add an amazing flavor to anything you used it in. Alas, he didn’t buy it so I noted the idea to try it at home. His drink however, was still lingering on my palette and I quickly snapped a pic of the menu listing the ingredients so I could fiddle at home. I know, totally weird, but don’t tell me you haven’t done the same.

So the drink listed bourbon, burnt sugar, smoke and vanilla. I’m assuming the vanilla was considered the pod soaking in the bottom, so I ruled out vanilla extract. It was mild, but I know what a good vanilla infusion can offer, so I wanted to mix it in somehow other than wasting a bean pod. I never knew burnt sugar was a syrup (completely naive of me, I know) nor did I know how it was made, so I turned to google.

Melt sugar, add hot water, and stir until smooth… That’s it! Not really, though. 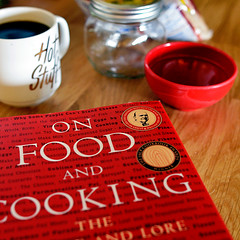 Okay, that’s the standard online recipe. I researched a lot. None of my cookbooks had a go-to recipe, and I didn’t want to wing it. Do I use white sugar, raw, brown? Do I use equal parts water to sugar? Does the water have to be hot, cold or room temperature? My head started spinning. I tried searching online for what the best choices were, and became more confused. Finally, I spent a good hour reading the sugar chapter in my On Food and Cooking book*. I opted for brown sugar, because I wanted to compliment the earthy tones of the bourbon, and I wanted a complex flavor. I also wanted to infuse the vanilla somehow.

*If you don’t have this book, I highly recommend picking up a copy. It’s super nerdy and scientific, but if you find yourself in the kitchen trying to decide between ingredients or finding a substitution, it will pay for itself. 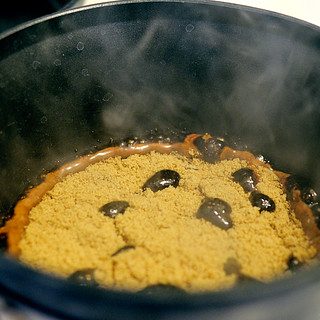 Begin heating the sugar in a small saucepan over medium/high heat on the stove. Make sure it’s spread it evenly across the bottom and resist stirring. It will begin to darken on the edges and bubble in the center. Once it begins to bubble and steam, stir occasionally to incorporate the unmelted sugar. When it has become mostly liquid, keep the heat on, but remove the pan and keep stirring. Slowly pour in the hot water as you stir. It will seize up and bubble as you add it, so do a little bit at a time. I heated my water up in the electric kettle next to the stove, so it was the perfect temperature. Too cold and it will make the melted sugar harden and you won’t be able to stir. Once all the water has been added, return to heat and stir slowly until it’s no longer bubbling and smooth as glass. 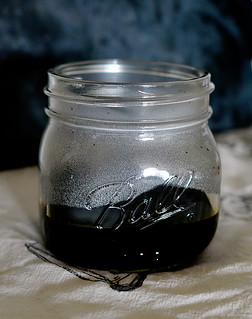 Remove from heat and pour into a heat safe jar to chill. You’ll want an air tight lid for this jar, but don’t seal it yet. Take the paste from half a vanilla bean pod scraping, and put into the jar with the syrup. With a fork, whisk the liquid to break up the vanilla paste as much as you can for roughly a minute. Put on the lid, and give it a good shake for another minute to finish incorporating the vanilla. It won’t need to be completely mixed in, as the vanilla will still release its oils over time. You want it mixed just enough so you aren’t pouring clumps when you add to the whiskey. Place it in the fridge to cool.

You can make this ahead of time and store it in the fridge for up to four months. Outside of using it for cocktails, there are some amazing recipes that call for burnt brown sugar, or you can drizzle a little on top a slice of pound cake. It’s truly versatile and you will use it before it goes bad. You can also increase or decrease the recipe as long as you don’t overpower the syrup with too much vanilla. Just keep the water and sugar amounts the same for any volume, and if you want, leave the vanilla out completely. You can also forego the vanilla altogether, but trust me, it’s an addition you’ll want to keep once you smell the amazing scent that permeates your kitchen after making it.

Pretend you’re in the study and pour yourself a drink… 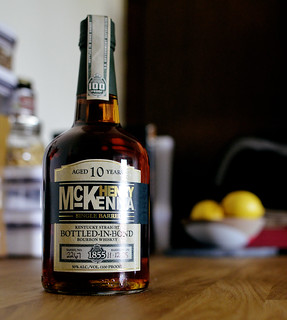 The first attempt at making this cocktail was after dinner. It was the perfect time to wind down. Sadly, I did the math wrong and added way too much syrup. Then, I noticed that the bourbon burn was still pretty strong, even after we added an ice-cube. I was perplexed. I chalked it up to things like using a different brand or proof of bourbon, but I wasn’t sure. If I hadn’t promised to be up by 5am the next day, I’d have kept researching. The next day, I educated myself further on bourbon. I was really impressed with the cocktail we had the other night, with its full body flavor of bourbon minus the burn. What was I missing? Where did I go wrong last night? Was there a way to cut bourbon? Then I found the answer. Water. It was so simple yet it seemed so wrong. Apparently it’s a thing for high-proof Bourbons. Someone even made a handy little Bourbon Cutting Tool for helping you figure out exactly how much water to add. I was starting with 100 proof, so I started by cutting it to 90 proof. If I needed to, I could cut further, but you can always add, not take away… 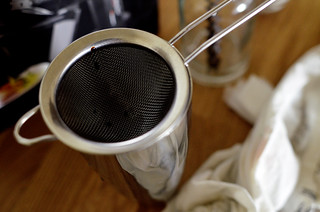 Place bourbon and water into the cocktail shaker. Over a small fine mesh strainer, pour the burnt sugar syrup to catch-all the floating vanilla bits. Cap the shaker and shake for 5-10 seconds. Pour over a large ice-cube in a cocktail glass of your choice. 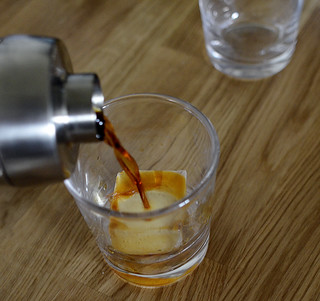 f you want to try the smoked version, you’ll need a handheld food smoker. I don’t like sticking the rubber hose directly into the shaker, so I poured mine into a glass with an ice-cube, and placed the glass inside a gallon sized ziplock bag. Seal the bag just enough so you can stick the nozzle of the smoker inside and fill with smoke for a few seconds. Turn off the smoker and seal the bag completely and let sit for 5-10 minutes. You’ll see the smoke settle on top of the glass quite a bit. Once you’re satisfied, remove from the bag, and find a cozy place to kick back and relax.